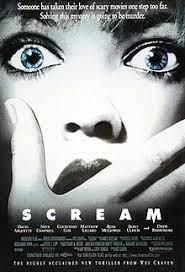 For the past several years we, like most horror fans, have acknowledged as October the holy month it is and watch a horror movie (or more) a night. While some fans will create their dream lineup ahead of time, we choose to instead go night by night, taking turns on who gets to pick the move for the night. No one gets a veto unless it is for a valid reason (e.g. when I was in grad school with a paper deadline and we couldn’t realistically follow a subbed movie).

Each year we keep track of our picks and find some arbitrary rating system. One year it was emojis, another it was gifs. One year we each wrote a single sentence review of each night’s movie. We have titled this practice our annual Scream Screen.

We’ve decided to track our schedule publicly this year, just to share with you – our dear community. We will post each Friday in October (plus a final post on or around 11/1).

Our arbitrary rating system? Our perfect pairing for a movie. It’ll be something different for each: drinks, snacks, another movie, mindless hobbies, or whatever other oddity comes to mind. For example:

Jess: Bailey Sarian for sure. There’s no way that Billy and Stu wouldn’t want all the coverage they can get, especially in unexpected spaces like Beau-Tube.

Trav: Evil Genius, cause I’m sure the docuseries on Stu and Billy would be just as weird