As I climb the rickety trailer stairs, I am grotesquely aware of the weighty finality of my decision.  I ponder how odd it is that they’d entrust us and our precious liquid panacea to this aluminum box on wheels, or, as they happily call it, the Blood-Mobile.  Surely they hear me arriving, are able to match it to their appointment book and draw their conclusions as to who I am; would they hear me flee?  Would they stop me?  Could I do it?  It’s a pointless thought experiment regardless, as my feet continue forward independently of my terror.

Every twelve weeks the Blood-Mobile sits in our parking lot, a part of what the company I’d found myself working for (that was, what, four years ago?  Yes, I’d just graduated and the job was at least slightly in my field.  I worked my way up through the ranks – my first boss becoming my de facto mentor.  He’d really appreciated my work ethic and out-of-the-box thinking.  He saw me as being on the management track.  Other managers initially disagreed, but they couldn’t deny it when I got shit done for them personally.  Except for goddamn Susan… Stop!  You’re trying to postpone this and they surely know you’re here by now) called their Give Back Initiative.  I knew Glen, our in-house consultant, devised the program and referred to it as corporate social responsibility.  But was he out here volunteering?  Not today.  Maybe in the early days, but the stakes were so much higher and everyone’s tension tight enough to snap at the slightest provocation.  No, Glen was inside, on the top floor, surrounded by Susan and the other tight-ass managers who deemed him Exempt From Donation while I was out here, Making a Difference, seemingly only at my own expense.

Really, though, there is no denying that I would be – am – Making a Difference.  My blood type is O Negative.   Universal donor.  Universally revered.  Universally expected to Give Back.  I remember my freshman year of high school, when we got our basic introduction to genotypes and phenotypes and blood types and whatever else.  Supposedly this is a basic tenet of biology education, but it butted up quite neatly to the school’s bi-annual blood drive.  I’m a cynic now and I was a cynic then, and I sure as shit don’t believe that strongly in coincidences.

If you’ve never donated:  within a couple weeks of your first quasi-sacrificial offering you’re sent (in the mail.  The goddamn mail!  They can tell me my iron levels instantaneously as I lay in a cot in the middle of the school’s cafeteria but once I’ve given 10% of MY LIFE FORCE I need to wait on the Pony Express to give me my fucking medical information??) a card with your donation amount, date, and blood type.  Because the blood type lesson and blood drive aligned so closely with midterms Mr. Fisbourne offered extra credit if we brought in this card, doubled if we got our parents’ blood types and completed a Punnett Square.

I wouldn’t say I’m phobic of needles or anything, but I’m not phillic either.  But my old man was a tough old shit and mean as hell, and I was failing biology – with a capital F.  So I sucked it up and donated and got his and my mom’s blood types and cried filling out a complicated Punnett Square (those things are a BITCH for blood types) and shared it with the class.  Then, twelve years ago, I learned I was a universal donor – as in, anyone who wants my blood can have it – and my life went to shit.

I didn’t go to college in my hometown, but I might as well have.  (Except for my old man.  He wasn’t there and that’s really all I ever wanted, right?  And I really ended up getting what I wanted, didn’t I?  Oh yes I did.  That’s a necessary outcome in this particular timeline, isn’t it?)  I stayed here after graduation, and got this job and the manager track even if fucking Susan hated me for it.  And two years ago Glen joined me here.  He was in my graduating class but went on for his Masters and wound up in the same place as me, with no need for a manager track because he was a special one-man department.  And this one-man department specialized in kissing community ass and making up for its exploitation of the less-educated local workforce by setting up a quarterly blood drive.

Fuck.  How long have I been holding onto the flimsy little screwed-on handle of the folding trailer door?  Will my reminiscing postpone the inevitable in any meaningful way?

I pulled back the door.  It stuck part way along its track.  I jerked it open further – evidently with a little more force than intended, because the top peg came completely off its track.  The tech sitting by the door sighed and stood up to fix it.  I’m not the first afflicted with such anxiety-bolstered strength, apparently.

I sat on a small vinyl-clad bench built into the vehicle while the tech fixed my mess.  When he turned around, I saw a badge reading JEFF and two very tired eyes that looked upon me with a mixture of disgust and pity.  Surely he’s seen a nervous donor or two in his tenure?

Jeff asks me the standard questions: name, date of birth, address, emergency contact.  Questions standard of any of the doctor office visits I’d had in the past year, but there was more scrutiny present.  I suppose they couldn’t afford to screw this up.

I can’t hide my shivers.  Jeff glances at me.  Perhaps it’s nerves, perhaps it’s the AC blasting.  Supposedly it’s good for the nausea some get during donation.  Either way, Jeff avoids discussing it.  There are more important matters (my blood) at hand.

Even I have to admit that Glen’s idea was a great one.  Our county, much like the county I’d left behind, parents and all, was suffering a blood shortage.  Blood drives were becoming more common in companies our size and larger – common enough that the blood center had to request additional funding for more Blood-Mobiles to meet the guilt-assuaging, socially responsible corporate-demand-disguised-as-charity of the local community.

Of course, that was two years ago.  The blood shortage has become a fully global crisis since then.  Local blood drives have been sharing their blood with neighboring county hospitals pending demand.  Hence, my blood has become a truly universal need.

I realize Jeff has asked me the same question multiple times now.  What was once a stoic yet bored tone has now become slightly annoyed.

That would be my husband.  When I told him of the pressures I was getting at work to donate, he looked down and to the side for a very, very long time.  Finally he told me he didn’t disagree.  That was pretty much the end of my fighting then and there.  God knows we’d both suffered enough loss recently, him more than me.  And as big believers in the Greater Good, we’d agreed as a couple a long time ago that saving a life was more than a noble cause – it was the fundamental reason for existence.  Make the world a better place than how you’d found it.  Even if you only have a small part, it still makes a difference for somebody.  My old man, for all his flaws, had had this same philosophy.  His company, funnily enough, had had the same philosophy as my company too…

I’ve finished answering the personal verification and legal follow-through questions and am directed to a tiny booth that could provide no realistic semblance of privacy in this RV.  This tech (nametag: MANDY) asks me various questions that are simultaneously more and less personal than those Jeff just covered with me:  current medications, date of last period, known sexual encounters.  I wonder if anyone has ever lied about these to avoid donation.

Apparently I’ve wondered this out loud, because Mandy takes a brief pause and answers me, voice thick, “You’d be surprised how honest people are at this point, even if they don’t want to be.”

I’ve become one of these unwittingly honest participants, because at this point it’s time for the iron test.  I pass this with little difficulty, only to find my heart rate is too high at the next phase.

“Take in a slow, deep, breath,” Mandy instructs me.

I am aware of thinking that in high school this had been grounds for dismissal from the blood drive.  I guess things are different with a Global Blood Shortage Crisis.

I am also vaguely aware that these deep breaths must have slowed my heart rate enough to pass, because I am led to a bench lifted at a slight angle on one end.  Across the aisle is Andy from HR.  He’s another O- with whom I’ve commiserated during the last two blood drives; we wondered when the pressure to donate – as Universal Donors, after all – would be so great that it would force us to crumble.  I see the needle in his arm and a nearly-full crimson bag rocking on the scale nearby and feel some comfort that this is not some cruel joke or weakness of character on my part to be here in this moment.  There is a sense of predestination in our comradery.

I make myself comfortable as the phlebotomist (BETH) approaches.  She smiles pityingly at me.

They all say that.

“Yea, I know.  ‘Everyone who has to stick a needle in someone says they’re good at it.’  But our center has been one of the top donation centers in the region, and they can afford to be picky in who they hire.  I can’t offer you a sedative, because it could contaminate your blood” (no we mustn’t have that, oh no) “but I can tell you I’ll make it as painless as possible.”

Beth ties the tourniquet around my bicep and it hurts, but probably less than the last time I had a tourniquet around my arm (freshman year spring blood drive.  I tried to donate again after learning about my blood type but threw up all over myself, basically in front of the whole school since the drive is always held in the cafeteria.  Why not the gym?  Because the fucking superintendent thought our athletics program was bringing in soOoOoO much money for the district…) and before I pull myself out of my reverie the needle is in the crook of my arm.

My blood is hot and thick.  I can see and feel it, as the beginning of the tube is taped to my forearm and hand.  I watch as it travels down the rubber tunnel, coiling and snaking its way to the first of twelve bags lined up neatly in a row.  A couple extra for safety.  Some people are bigger and have more blood overall.  Or something, I guess.

I wonder how many I will fill.

“The first couple of bags are the worst, but they go by fast.”

Andy’s eyelids flutter.  We make some sort of eye contact – he is so pale that it’s hard to tell if it’s meaningful.

“After that you mostly don’t notice.”

He is on bag seven.

“Your blood is flowing relatively quickly.” 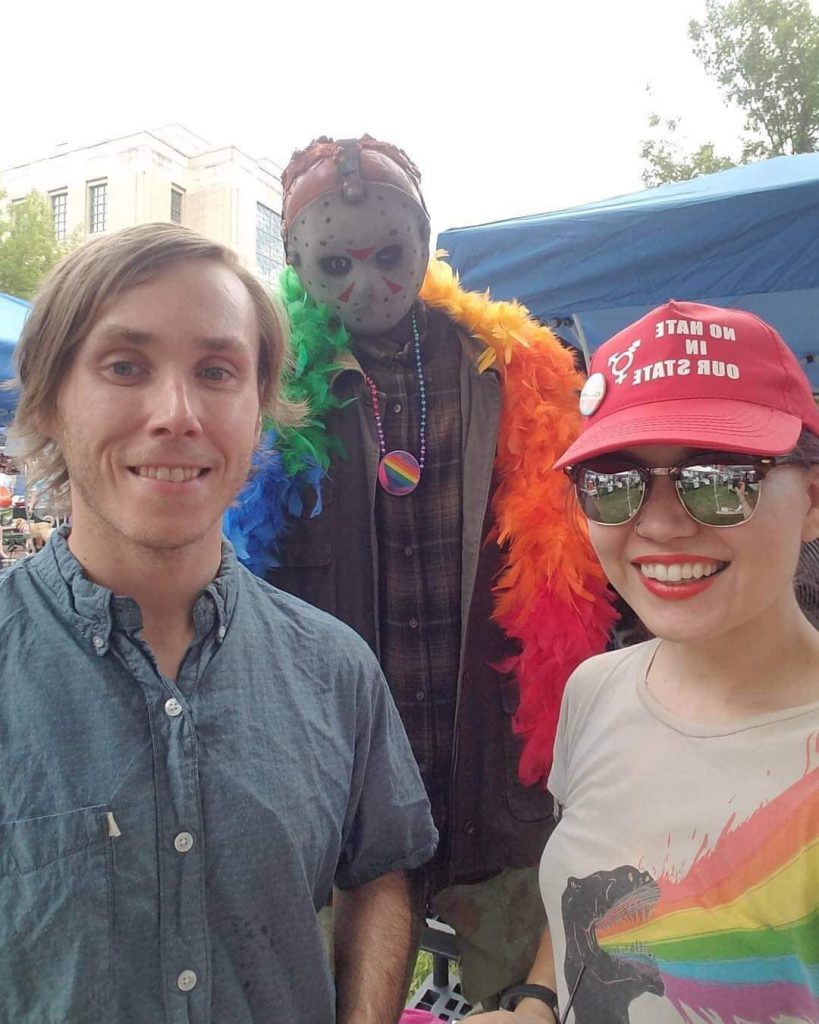